BRUCE H. TAPLEY
THE TAPLEY COLLECTION
Bruce Tapley is a Jewelry Designer that excels in 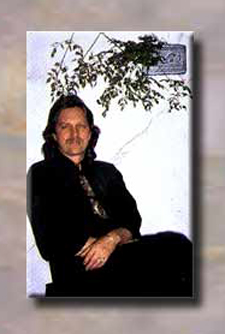 many styles of jewelry making. As a completely self-taught goldsmith,
who does all his work himself, he was compelled by necessity to study
a variety of techniques to attain his current level of proficiency. From
his True Classics and Nouveau Estate Collections of intriguing
wedding bands to his Hawaii-inspired Kula Jewels and the classical
renditions of Reflections of Antiquity and Atelier Atlantis, an extensive series of exquisite pieces featuring prominent characters and themes of Ancient Greco-Roman Mythology, most of Bruce's jewelry transcends time.

Handling some of Bruce's classical jewelry is like emerging
from an archaeological dig with precious golden finds intact. The
word 'Classical' is thrown around quite a bit these days, but these
pieces truly define the word. That is: lucid, with correctness of style
and order, and holding enduring significance. The emphasis here is
on form, simplicity, and elegance. Bruce also sometimes defines
classical as "something you just don't want to turn away from, whether
consciously or subconsciously. Something that captures the senses,
and that gives a feeling of joy or comfort." Wearing a fine piece of
unique, well made jewelry is a way of keeping this perception close
at hand.

Bruce discovered that his path opened to him in a serendipitous
manner. After returning to the U.S. from an extended trip to Europe,
he was rummaging through his mother's basement when he discovered
an old box behind a false wall. Upon opening the box, he found an
extensive collection of late 18th Century Italian Intaglios or reverse
cameo carvings. The carvings were placed there about 40 years before
by Bruce's father, a collector of antiquities and artifacts. Ten months
in Europe had exposed Bruce to many of the greatest museums as well
as the ubiquitous art and architecture. "I was very impressed by the form,
structure and strength of columns, and the fluidness of decorative art
patterns such as the Greek Fret Key, egg and dart, and the Rolling Wave.
When I opened that box of carvings, they jumped right out at me! Besides
knowing that I could learn to make a new career out of my new find,
it was also a way for me to connect with my father, who had passed
away many years before."

As Bruce was learning to become proficient in his new craft,
he had a horrible accident that changed the course of his career. A
mistake using a power saw caused him to tear apart the palm of his
right hand. A large scar criss-crosses his hand like a map of the
tributaries of the Mississippi River. He almost lost his hand, but with some
quick thinking and a great surgeon, he was able to turn the experience into
a positive one. "My life seems to be a series of defining moments. As I was
losing consciousness, I realized that I was in the throes of paying some
heavy dues, and I decided then that if I were lucky enough to regain any
use of my hand, that I would devote myself to creating beauty." After more
than 20 years, Bruce has begun to regain feeling in his hand. "Once I
recovered from the accident, the fact that I had limited use of my hand never
really bothered me. I used it as a motivational factor."

Bruce knows that people are very emotionally tied to their jewelry,
whether it's your first heirloom from parents or grandparents, a class ring,
sweet sixteen or an expensive wedding set. When you are in the middle of
your day and can look and see the pieces that you adorn yourself with, it
gives you a sense of form and continuity. Jewelry is something than can
actually make you happy everyday, even if in very subtle ways. " This,
to me, is how I feel when I create my classical pieces. My artistic career has been a quest to
reach classical ideals. I've always had a strong desire to
create things that would be around long after I'm gone, as my legacy, so to
speak. This is why I choose as my medium precious metal and stone." Some
of the research that Bruce has done on his father's carvings has revealed
an interesting phenomenon. The carvings that were made 200 years ago
were inspired by ancient gold coins of the realm, some from as far back
as 2600 B.C. And now, 4600 years later, Bruce is returning these images
to their original precious material...Gold. Full Circle.

Bruce says that living and working on Maui feels very close to
his idea of the archetype of the Artist in Ancient Civilizations that is not
found in the most of the rest of America. "Hawaii resembles the Greek Isles
to me, and Santorini in particular, especially living on the side of a volcano.
It resonates with the fire below the surface which in turn produces such
fertile soil. This, to me, stimulates creativity. I hope to be here doing what
I love most for a very long time."